I have started my own genealogy related business:  Out of Thin Heir

Dear Great-great Grandfather, John Tully, you are such an elusive sort.  I have been looking for many years to find your origins.  You see, my husband and I are headed to Ireland next August and I have a deep need to find you and where you came from.

Based on what I DO know about you, I'm betting you are quite the scoundrel...but that's okay. Either you don't really know truths - or you don't like to tell them:  sometimes you say you were born in 1854 other times 1857.  This makes it hard for me to track you down!

Is this you?? Did you travel alone at the age of 16 to live with your brother in the USA? 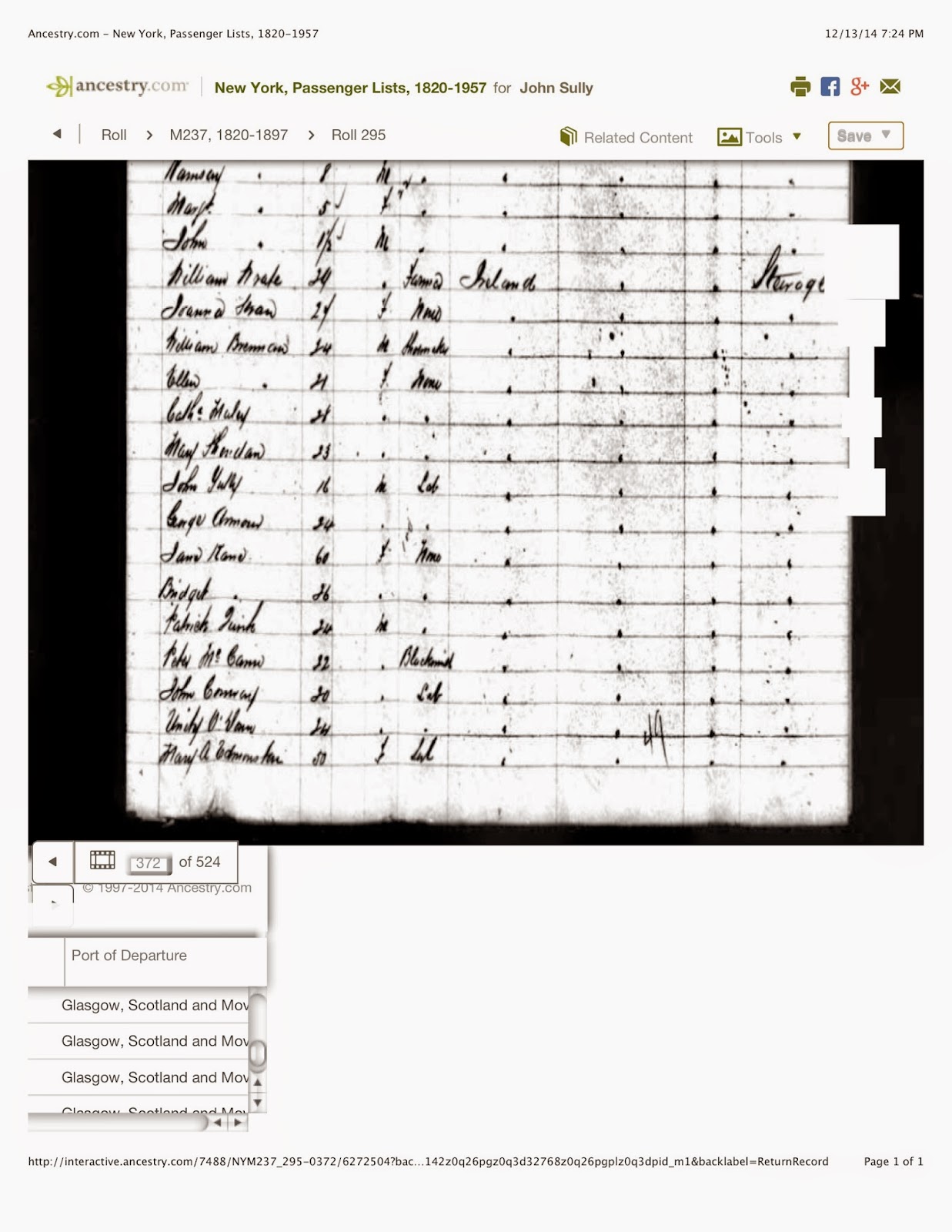 The first hard evidence I have of your existence is the 1875 NY state census.  So, you've been in the 'States for 6 years but I can't find you!!!  You show up in Fishkill Landing (now the City of Beacon NY) already a Naturalized Citizen, living with your brother Frank and Frank's wife Annie: 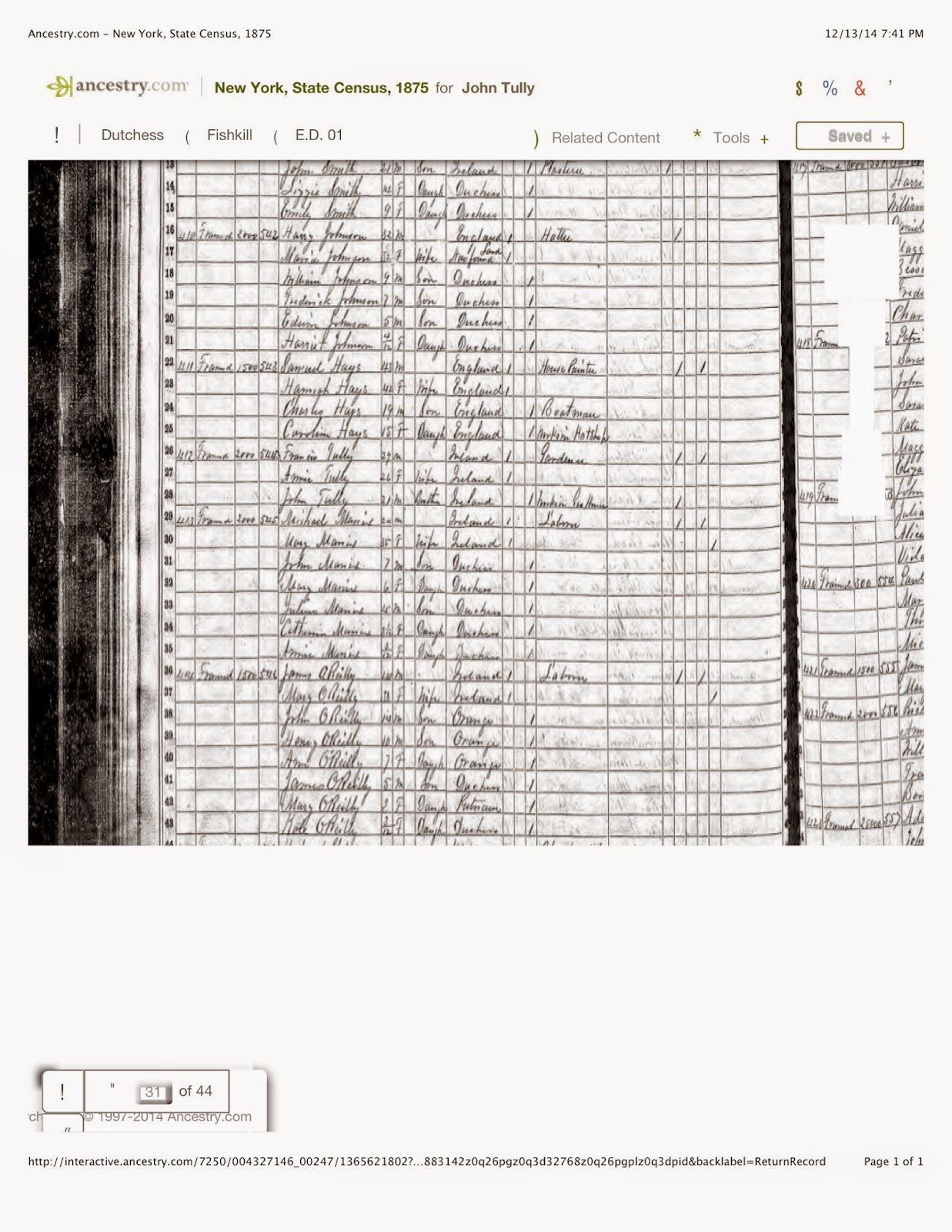 Next thing I know it' s 1880 and you are married to Mary Manning, work in a "gas house" and have a son - my great-grandfather "Charley"... Charles Augustus Tully. But, where is Mary??? Why isn't she caring for Charley? 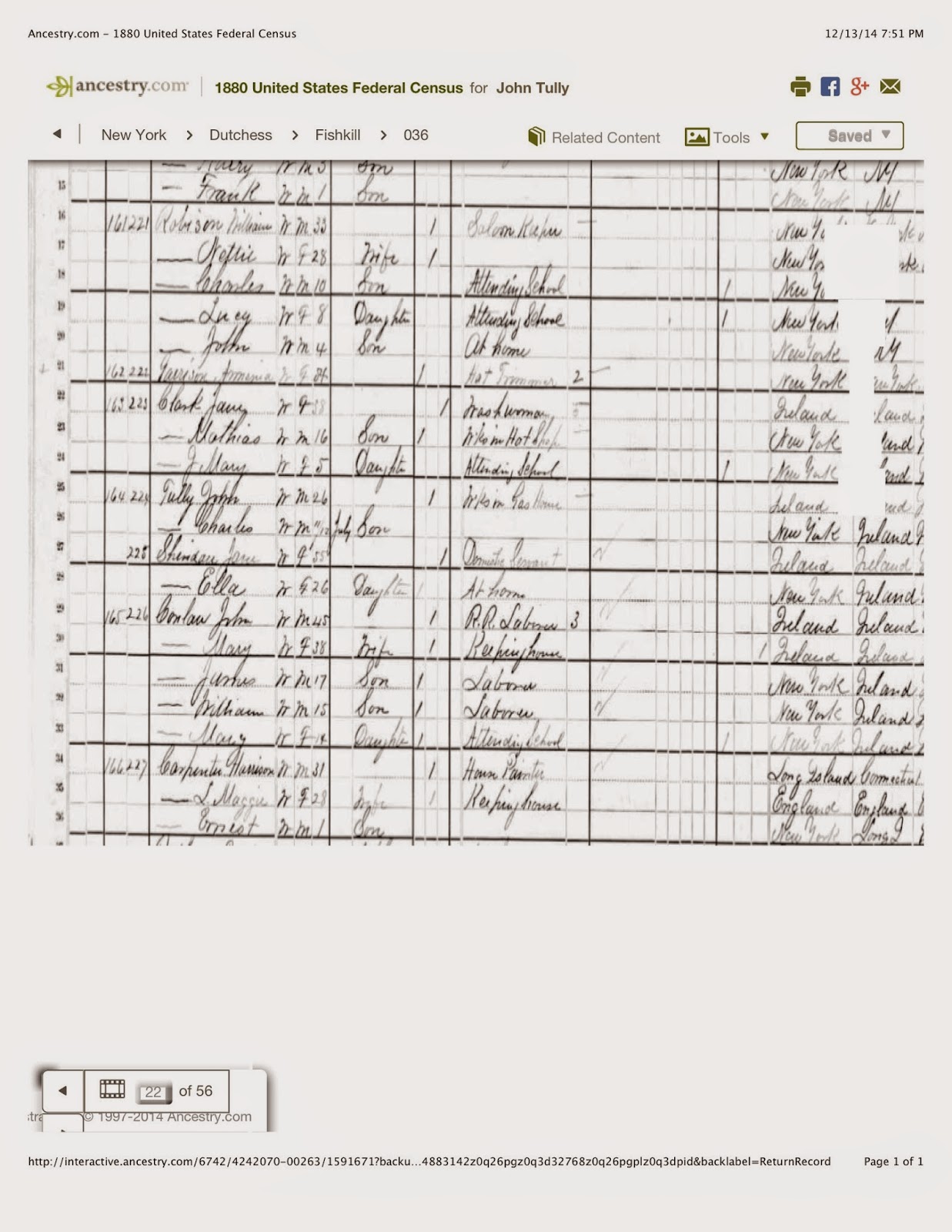 At some point you had quite a reputation as a good guy... The Poughkeepsie Daily Eagle ran a story about you saving a lady:

DUTCHESS COUNTY NEWSThe Telephone says that on Friday evening last, there happened in that village an accident of a serious character, and it was almost a miraculous escape of a lady from being killed.
At about 8 o'clock Mr. Isaac C. Wood, nurseryman, of FishkillVillage, accompanied by his wife, was coming up Beekman street in his wagon, having just returned from the other side of the river. When just above the gas house Mr. Wood happened to think of some freight that was at the depot for him, and told his wife he would drive back and get it, then turned his team, and in doing so, the wheel caught in some way under the wagon, which partiallyupset it throwing both occupants out over the dashboard.
Mr. Wood fell to the ground directly behind the horse's heels, but was not much hurt, receiving only a few bruises. Mrs. Wood was less fortunate, as in falling out she caught on the pole, and the reins became entangled about her and were drawn tight about her limbs.
The team ran, and Mrs. Wood was In a most dangerous position at the horses' heels. She remained in this position for some distance, then fell to the ground and was dragged several feet before the team could be stopped.
The horses ran as far as Thomas Clark's store, and were there stopped by John Tully, of the gas works, who with others assisted in extricating the lady from her perilous situation. Mrs. Wood was taken into Patrick Clark's house, and Dr. J. E. Moish was called and examined her injuries.
About an hour later Mr. Wood procured one of Peattle's carriages and took his wife home. On their arrival Dr. Conkling was present and dressed her wounds. She was severely cut and bruised, but it was thought that no bones were broken.

Posted by Binney at 8:25 PM No comments:

Denise has written a wonderful story about the emigration of Pieter Clasen Wyckoff to America.  Is is also full of lively pictures and illustrations.  I urge you to have a read
Denise Dahn
Posted by Binney at 4:25 PM No comments:


I haven't posted in a while due to CrAzY family matters.  I'm trying to put together my DAR application through Joseph Washburn and I came across this page:

This is our relative Brian Belanger - who let me know about the error in our Secor lineage!!  Take a look at this page- quite interesting!
Posted by Binney at 9:46 PM No comments:

As some of you may know, I possess a trunk owned by my great-grandparents, Emily and Gustave Wassweiler. Amongst the items in the trunk was a box. 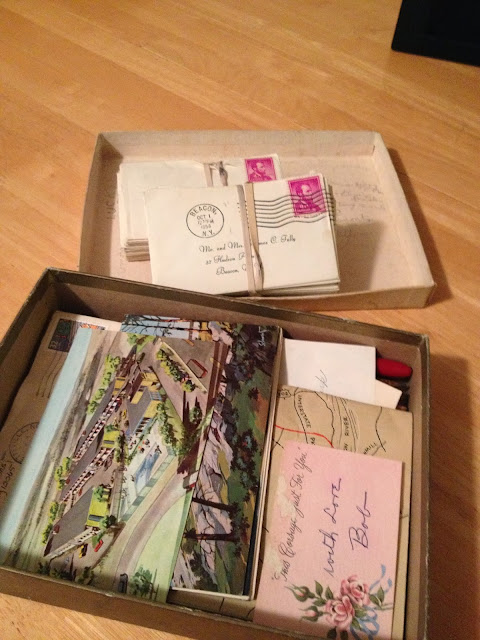 Now I realize that this box likely belonged to my Aunt Audrey.  Audrey Emily Tully. I will send these items to my cousins, as they truly belong to them - but for now I am selfishly gleaning all the genealogical facts that I can.

Next on the agenda is a shower, right?  Who is invited to a shower?  Friends and family that's who!  Let's take a look at the guests in attendance.  Only live people will attend ☺so we know which of our relatives are living at that time: 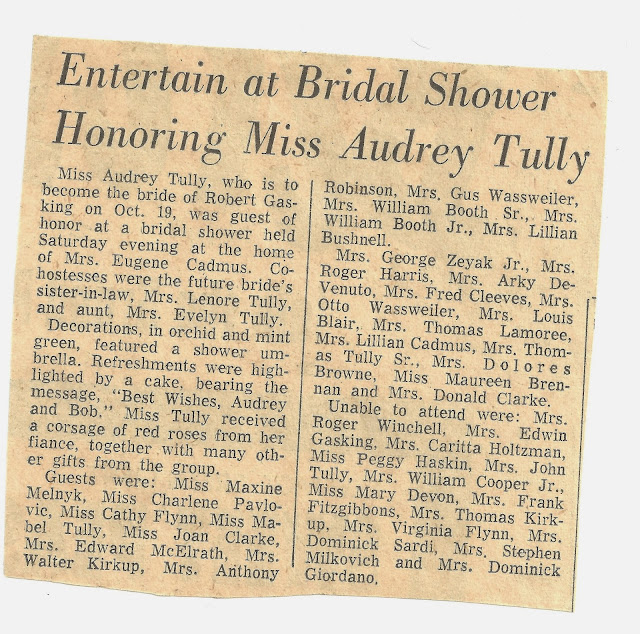 Notice the bunches of envelopes in the top box.  Looks like wedding invitation response cards, doesn't it? BINGO! and SCORE!

So... I've compiled a table of these facts which may help others: 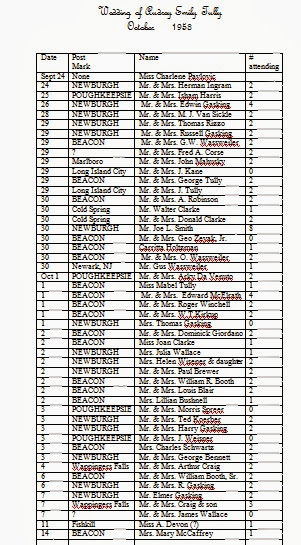 For those interested I've scanned the cards of relatives which you will find below.  I find it interesting to see their handwriting: 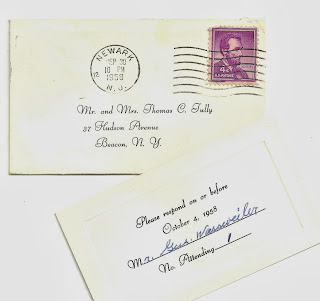 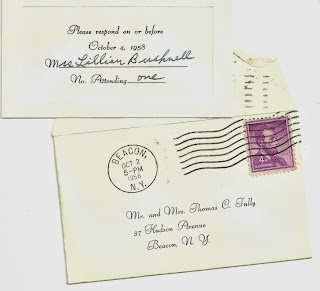 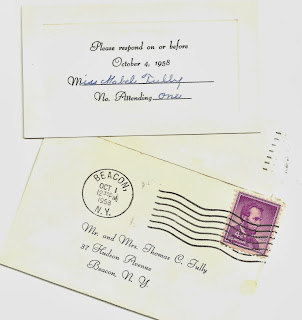 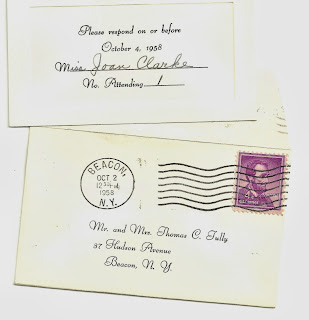 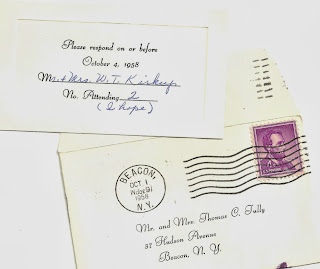 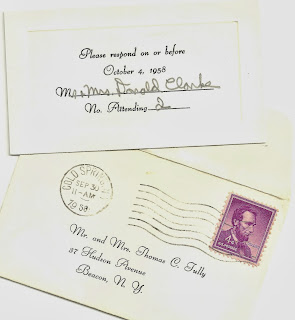 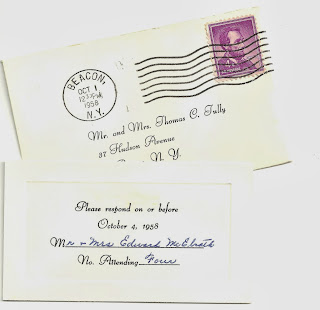 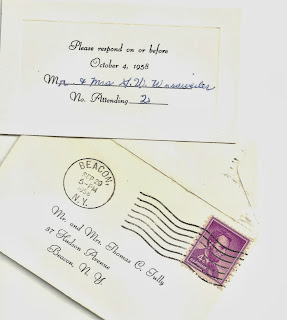 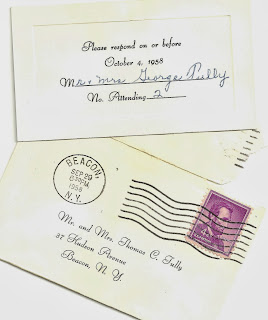 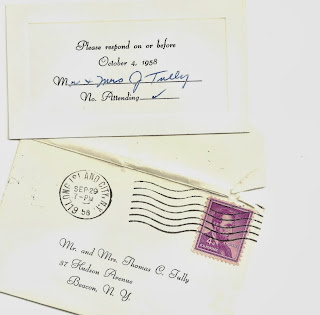 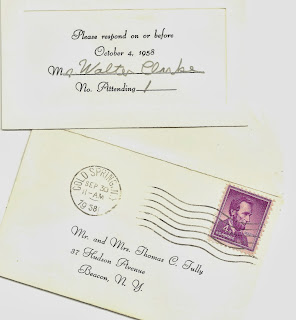 Posted by Binney at 8:43 PM No comments:

Tonight I ask you to ponder a  possibility:

My twice great grandfather, John Tully, was he or was he not the John Tully that was “blown through a wall”?

First, a little bit about Grandpa Johnnie: Born in Ireland about 1857, John came to the United States at about age 12.  From where, where to?? I sure haven’t been able to find out!

I find John at age 17 in 1875 living in Fishkill Township with his brother, Frank Tully and Frank’s wife Annie. 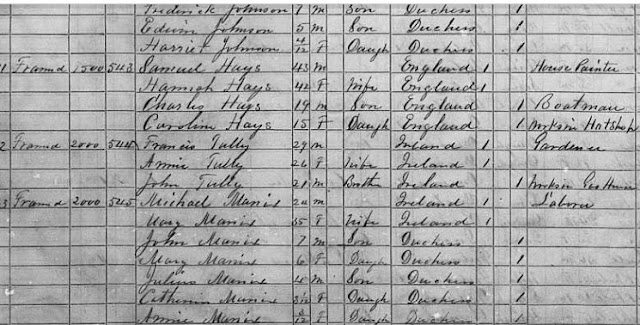 I next find John in 1880 still in the Town of Fishkill, but narrowed down to Fishkill Landing (the part of Beacon closest to the river).  Apparently John is married and has an 11 month old baby (my great grandfather Charles Augustus) but no wife.  Why? Where is she and why isn’t she caring for this baby?

Then in 1892 he is with his wife, Mary and more kids…and John Riley. 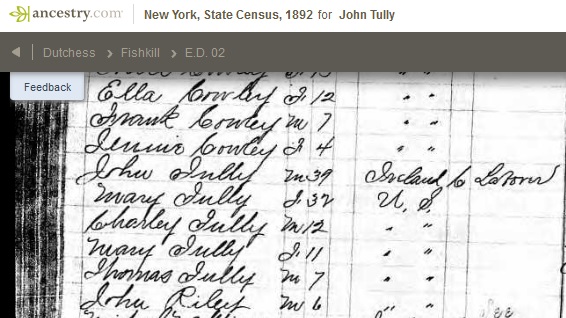 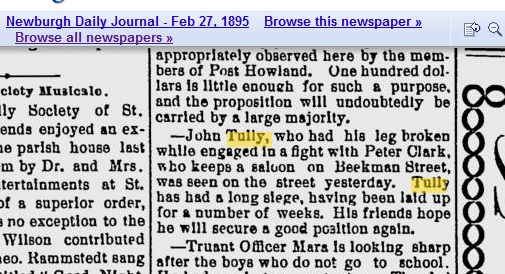 In 1900 he is widowed and back living next door to his brother Frank on Newburgh Ave. in Fishkill Landing.  When did Mary die??  Where is Thomas?  Thomas is only 15!

These are the known facts about John… now consider this: 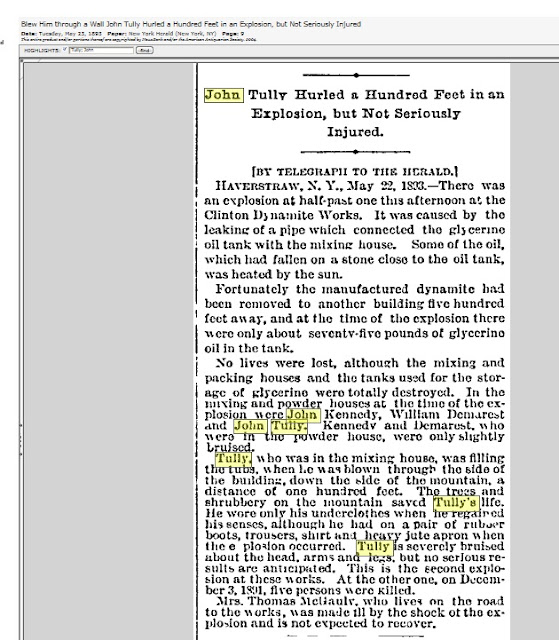 Is this Grandpa Johnnie??  That would have been one hell of a commute for the 1890s!  BUT… my brothers and I recently cleaned out my father’s garage after my Dad died.  He had lots of things from not only his house, but his father’s (my grandfather, Thomas Tully – who was the son of Charles Augustus, and grandson of our subject).

There was so much junk that we kept some old wooden boxes to transport this stuff and to use in our own homes.  It didn’t occur to me that these boxes had a common theme: 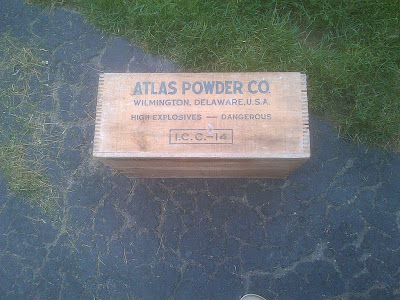 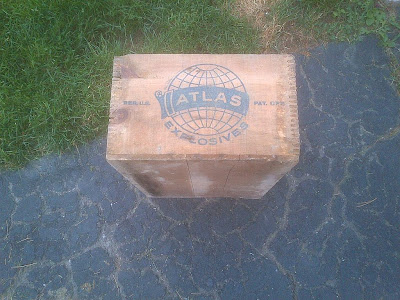 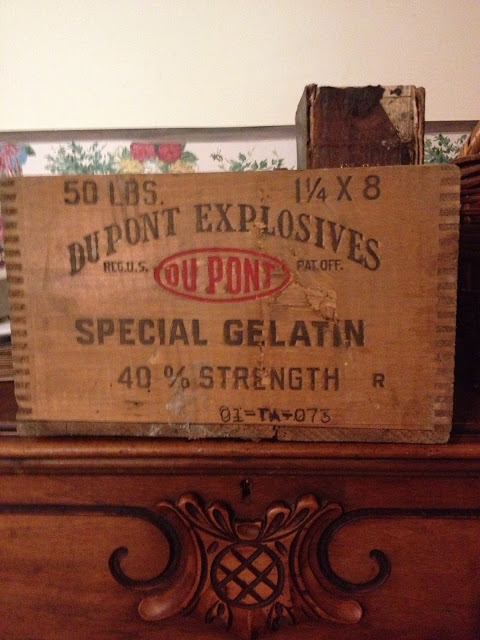 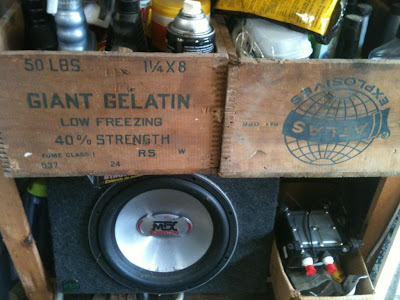 So, where did these come from? What do you think???

Is there a Doctor in the house?

This may not be genealogy related, but it will be someday! ☺

My daughter, Sarah, a medical student at Lake Erie College of Osteopathic Medicine, will be travelling to Peru in June with a group of other medical students on a medical mission to help the medically underserved in that region. This mission is organized through the International Service Learning Group (http://www.islonline.org/) but each student must pay their own expenses (travel, lodging, meals, etc.). The students are looking for donations to offset the costs of supplies and equipment.


Sarah attended Riverhead Central Schools from K-12 and is a 2008 graduate of Riverhead High School and a 2012 graduate of Binghamton University. Her family still resides in Riverhead and would be more than happy to pick-up any donations or receive them on Sarah's behalf at 48 Ellen St., Riverhead NY 11901.

Please help if you can!
Posted by Binney at 3:11 PM No comments: